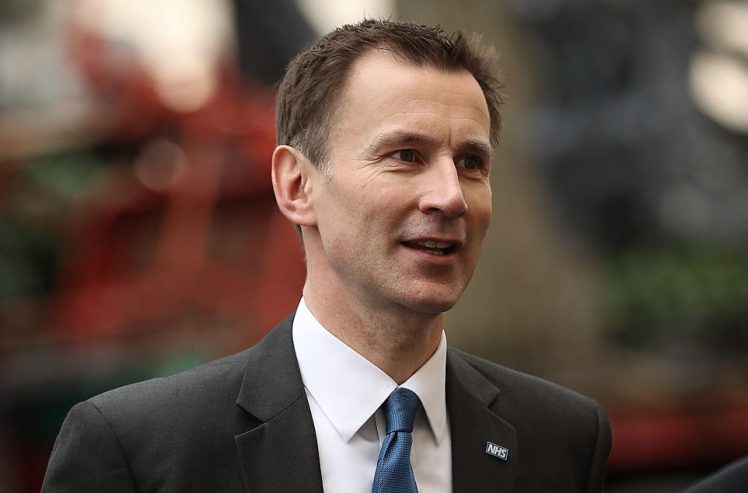 Jeremy Hunt is a British Conservative Party politician serving as the Secretary of State for Foreign and Commonwealth Affairs since 9 July 2018 and Member of Parliament (MP) for South West Surrey since 2005.

Jeremy Hunt was born in Lambeth Hospital, Kennington, the eldest son of Admiral Sir Nicholas Hunt, who was then a Commander in the Royal Navy assigned to work for the Director of Naval Plans inside the recently created Ministry of Defence, by his wife Meriel Eve née Givan (now Lady Hunt), daughter of Major Henry Cooke Givan. Hunt is a descendant of Streynsham Master, a pioneer of the East India Company.

Mr Hunt studied Philosophy, Politics, and Economics at Magdalen College, Oxford, where he was President of the Oxford University Conservative Association. Hunt had a successful career as an entrepreneur before entering parliament in 2005.

After becoming Tory leader, David Cameron, a contemporary at Oxford, made Hunt the shadow disabilities minister. In a reshuffle in 2007, he was promoted to shadow culture secretary. When the Conservative-Liberal Democrat coalition entered government in 2010, Hunt joined the cabinet as secretary of state for culture, media and sport – a key role in the run-up to the London 2012 Olympics. As Culture Secretary, Hunt spearheaded the drive for local TV, resulting in Ofcom awarding local TV broadcasting licences to several cities and towns.

A controversial figure at times, Jeremy Hunt was appointed Secretary of State for Health and Social Care in 2012 and held the post for a record six years, facing controversy over the junior doctors’ strike and accusations of NHS cuts, and presiding over the “worst ever” winter for the NHS. Jeremy Hunt also rowed with physicist Professor Stephen Hawking during the final months of the scientist’s life over the future of the health service. On 3 June 2018, Hunt became the longest-serving Health Secretary in British political history.

On 9 July 2018 Mr Hunt was appointed Foreign Secretary following the resignation of Boris Johnson. “My principal job at a time of massive importance for our country is to stand four-square behind the Prime Minister so that we can get through an agreement with the European Union based on what was agreed by the Cabinet last week at Chequers,” Jeremy Hunt said just after the appointment.

“This is a time when the world is looking at us as a country, wondering what type of country we are going to be in a post-Brexit world. What I want to say to them is Britain is going to be a dependable ally, a country that stands up for the values that matter to the people of this country, and will be a strong confident voice in the world,” Mr Hunt added.

According to the British observers, with a Brexit deal on the table, the new foreign secretary is facing his biggest challenge yet.