The unilateral coercive measures applied by source States out of a concern for human rights are actually contributing to the worsening of the humanitarian crisis in Syria, affecting the life of Syrian citizens, hindering the delivery of their daily basic needs, and impedes national and international efforts to respond to the humanitarian needs of citizens. 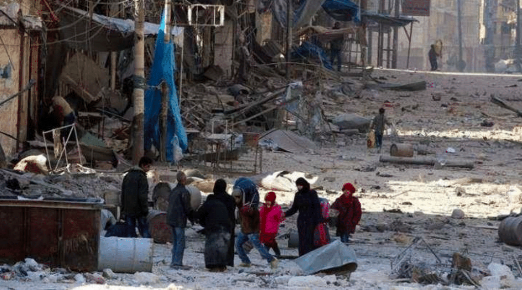 At present the disaster has led to 5.6 million refugees living outside the country, the majority are living in regional countries (Turkey, Lebanon, Jordan, Iraq, and Egypt). 6.6 million People have been internally displaced in 2018. Lack of job opportunities, the closure of factories, unable to obtain raw materials have all contributed to increasing the emigration of Syrians.

Before the 2011 uprisingSyria was a middle-income country and the only country in the region that was self-sufficient in food production, had achieved many of the Millennium Development Goals, including those related to primary education and gender parity in secondary education, and has made progress in decreasing malnutrition and infant mortality rates and increasing access to improved sanitation. The Syrian economy was relatively stable with annual GDP growth averaging around 5%.

Foreign currency reserves have been depleted, and international financial and other assets remain frozen, in 2010, 45 Syrian Pounds were exchanged for one dollar; by 2017 the rate fell to fell to 515 Syrian Pounds per dollar. Oil and economy embargoes impair the ability of Syria to purchase food internationally and the financial embargo prevents the country from paying for whatever it can afford to import. Furthermore, the declining economy makes it more difficult to subsidize food.

There have been repeated calls for States to avoid applying sanctions unilaterally, including through resolution 39/210 of UN General Assembly, which states that developed countries should refrain from threatening or applying trade and financial restrictions, blockade, embargoes, and other economic sanctions, incompatible with the provisions of the Charter of the UN and in violation of undertakings contracted, multilaterally and bilaterally, against developing countries as a form of political and economic coercion that affects their political, economic, and social development.

The US and EU sanctions on Syria are contributing to this humanitarian calamity, have been described as some of the “most complicated and far-reaching sanction regimes ever imposed”.

American sanctions, first applied in December 1979, amended with comprehensive measures  in May 2004, and strengthened again in 2011, are all-encompassing and include trade and travel restrictions, financial sanctions, and asset freezes on individual in Syria, as well as an arms embargo ban on “dual use” goods includes such items as drilling equipment and pipes used for water and sanitation which require a special license even though a shortage of fresh drinking water is a major health hazard in Syria.

EU sanctions were first imposed on 1 December 2011 and are subject to an annual review. They include an oil embargo, as well as “restrictions” on certain types of investments, a freeze on assets held by Syria’scentral bank in the EU, and restrictions on exports to Syria of equipment and technology, such as those that could be used to monitor telephone and internet communications.

Despite the humanitarian exemptions, in practice, international private companies are unwilling to to jump the hurdles necessary to ensure they can transact with Syria without being accused of inadvertently violating the restrictive measures.

Prior to the current crisis, Syria practices universal free health care for all its citizens, enjoyed some of the highest levels of care in the region. More than 90% of the medicines used in Syria were locally produced. Since then, economic sanctions, currency fluctuations, difficulty in the availability of hard currency and an increase in operational costs have negatively affected the production of medicines and pharmaceutical products such as anti-cancer medicines, and other specific medicines.

Medicines which are patented in the US or Europe cannot be substituted for from other markets. As a result, available quantities of medicines are currently limited, and they often do not cover the health needs of the population.

The World Health Organization reported that approximately 11.3 million Syrians lack access to adequate health care, and one in three children is missing out on life-saving vaccines, declining from 95% in 2006 to only 60% in 2016.

The demands created by the crisis have overwhelmed the System and created extraordinary high levels of need. Despite this, restrictive measures, particularly those related to the banking system, have harmed the ability of Syria to purchase and pay for medicine, equipment, spare parts and software.