When in Europe we speak about Korea, a paradox is immediately apparent. European public opinion is much more focused on North Korea (DPRK), one of the most closed, isolated and secretive states in the international community, whilst the attention that its Southern neighbour South Korea (ROK, Korea) is due, is rarely given. Below the 38th parallel lies a story of economic prosperity and increased international prestige. 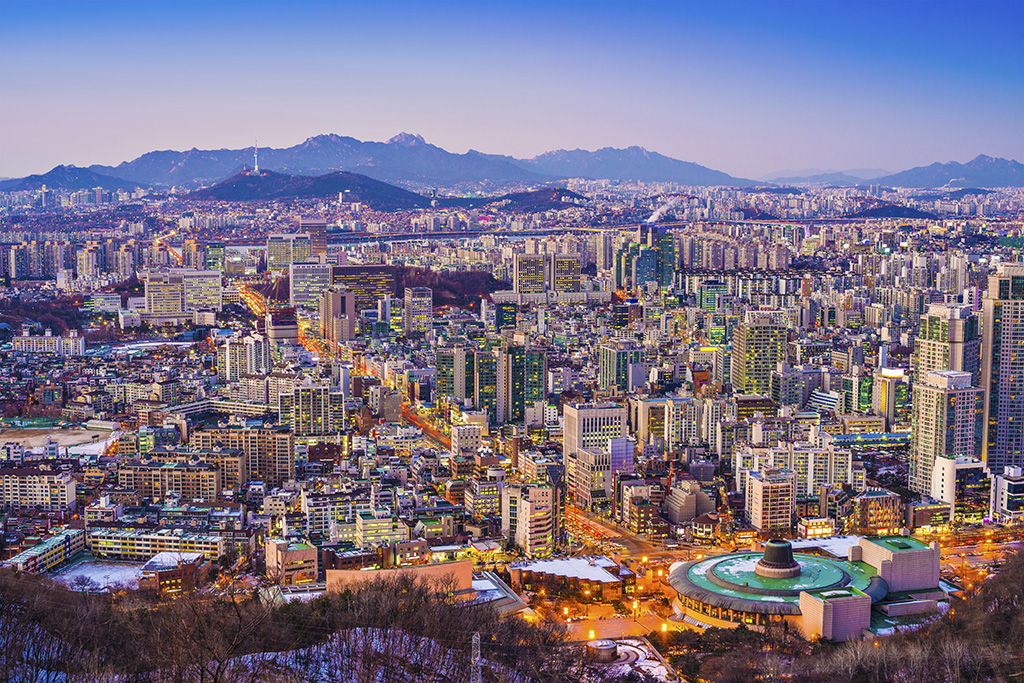 What is the name of North Korea’s leader? For which reasons is North Korea’s often on the international spotlight? No doubt many readers would know the answers. Now, what is the name of South Korean President? This question would most likely go unanswered. This is to show a quite apparent paradox. European public opinion has a better knowledge of North Korea, which is an authoritarian regime, one of the most secretive and poorest states in the world, than of the Republic of Korea, its Southern neighbor and actually the country we should focus our attention instead.

“It’s possibile!”. This sign can be found, both in English and Korean, on the facades of skyscrapers under construcion in Seoul and it embodies the spirit of a nation which has witnessed Asia’s most remarkable economic development of the last four decades behind China.

It is 1963. The Korean War ended up ten years before and North Korea leads on South Korea both in terms of per capita income and industrial capacity. Now fast-forward to 2013. 50 years later Seoul’s economy size is over thirty-nine times bigger than Pyongyang’s and GDP per capita shows a twentyfold gap. In 1960 the ROK was as poor as Ghana whereas now it holds OECD membership – as a matter of fact South Koreans are very much proud to be the first OECD nation to become a donor afer being an aid recipient, therefore joining the Development Assistance Committee. “A country that lived by the mercy of others is now able to give to others in need and stand shoulder to shoulder with the most advanced countries”, said former President Lee Myung-bak during his inaugural speech.

Over the past 30 years South Korea has catch up with Japan to become one of the highly developed nations in East Asia. “Its income per capita has jumped from less than 20% of Japan’s four decades ago to 90% today – states Professor John West, Executive Director of Asian Century Institute – but the catchup vis-a-vis the US is equally impressive: from about 10% of US income per capita in 1970 to 64% today”.

From 1980 to 2010 South Korea’s GDP per capita grew more than fivefold (by comparison, Japan’s per capita GDP grew by just about 70%). Throughout the last ten years the nominal GDP and the per capita income have grown more than half, with public debt representing only roughly a third of the GDP. According to the IMF, South Korea posted a 3.7 GDP growth in 2014 and is expected to reach a 4% growth at the end of 2014, with unemployment faring around 3.5%.

Seoul is the 15th largest global economic power and the fourth largest in Asia (by GDP in nominal terms). It is also the world’s seventh largest exporter and a leading global nation in shipbuilding, production of LCD screens and in the distribution of broadband per capita. It is the third leading nation in the production of semi-conductors, the fifth in automobile manufacturing and in scientific research.

On November 2010 the Republic of Korea presided over the G20 summit. The hosting of the G20 summit was an event that was genuinely felt collectively – the streets of Seoul were filled with posters and billboards that drew attention to the G20 summit. This marked an esteemed international recognition which places the country amongst the major global economic – although not political – powers of the future and give Koreans a huge sense of national pride, accustomed as they are to deal with two giants as neighbours, China and Japan. Still labelled as an anonymous developing nation a decade ago, Korea is now one of the “Next 11”, a Goldman Sachs term coined to identify the eleven countries thought to have a high potential of becoming, along with the BRICS, the world’s largest economies in the 21st century.

South Korea’s growing international influence goes beyond the realm of trade and economics. Hallyu, the growing influence of Korean pop culture is running hand in hand with the country’s economic success. Korean pop bands, know as K-Pop, have fans in East Asia, North America as well as Europe and Latin America. Korean soap operas count on millions of viewers in Japan, China, Thailand and Southeast Asia. Korean movies and directors captured Hollywood attention and amassed international prizes whereas Korean language courses are being inaugurated all over the world – from Milan to Dubai to Santiago. During her inauguration speech, President Park Geun-hye mentioned the ‘Korean Wave” by saying that it “is welcomed with great affection that not only triggers happiness and joy but one that instills abiding pride in all Koreans”.

Since entering the WTO in 1995, Korea started to increase its international competitiveness, well aware of how important that is for an export-led economy. During the last two decades Korean governments have been pursuing a two-faceted strategy. On the one hand, they undertook domestic policies aimed at upgrading the economy’s industrial structure, easing business regulations and attracting foreign investments. On the other hand, they set a geoeconomic strategy which focuses on the signing of bilateral Free Trade Agreements (FTAs) with meaningful economic players.

After the 1997 financial crisis Korea undertook significant reforms that brought about achievements such as consistent progress on fighting bribery and corruption and enabling foreign companies to better operate in the country. “Financial and economic crises were seized upon by the Korean government as moments for reform and relaunching economic development”, argues Professor West. In 2011 South Korea entered for the first time the World Bank’s Doing Business top ten, which provides an overall “ease of doing business” ranking of 185 economies. Not only did Seoul reduce red tape burocracy and strengthen the protection of investors. It also delivered to its export-led industries world class logistics and infrastructure, transforming the country into one of East Asia’s major hubs: Incheon International Airport is one the best airports worldwide whereas the port of Busan ranks in the world’s 10th largest. Equally important have been the well-planned investments on soft infrastructure, with internet broadband connection being so widespread and running so fast that online gaming has became a sort of national sport.

Further competitiveness could not be reached without good education (Korea posted the highest investsment of education among all developing nations), an industry upgrade from low-tech to high-tech exports and sound macroeconomic management.

Seoul is also one of the world’s most enthusiastic champions of green growth policies. Through the National Strategy for Green Growth (2009-2050) the country “aims to become a leading exporter in the area of green research and technology”, as the OECD reported. The Global Green Growth Institute, established in Seoul in 2010, stands to prove the nation’s commitment on pursuing a development model which fosters at the same time economic growth and environmental sustainability.

Competitiveness is deemed so important that in 2008 former President Lee Myung-bak set the Presidential Council on National Competitiveness (PCNC), which well represents the nation’s focus on competitiveness. The PCNC has four main missions: bringing about regulatory reforms, innovation within the public sector, investment promotion and legal and institutional advancement. The PCNC’s ultimate goal is “expanding the potential growth rate to 7 percent by promoting investment and enhancing economy-wide efficiency.” This goal is to be reached partly through the opening of the domestic market to foreign products and companies.

The increasing economic clout of South Korea is represented by its dynamic free trade agreements strategy, which are part of the “Global Korea” economic diplomacy strategy. Since the establishment of the FTA Roadmap in 2003, Korean governments have engaged in FTA negotiations with more than 50 countries. The signing of FTAs with both the European Union (2010) and the USA (2011) represents for Seoul a winning strategy to enhance future economic growth opportunities as well as deal with the growing influence of China. It is also a clear, landmark step towards South Korea’s further integration within the global economy and next-level relations with the West. According to economists, the US-Korea FTA would increase South Korea GDP between 0.38% and 2.41% whereas the U.S. economy would grow 0.02 to 0.2%. US exports to South Korea would rise by half and US imports from South Korea would rise by one-third. The Korea-EU FTA is estimated to increase South Korean exports of roughly 6 percent and EU exports of more than 1 percent along with creating between 300,000 and 600,000 jobs. According to the Italian Trade Commisson, the tariff reductions will bring about savings for those companies exporting machineries, chemical, fashion and food products – all industries where Corporate Italy holds a comparative advantage. Another crucial FTA was signed with Chile in 2002, for it opened to Korean companies the doors of South American markets.

If Brazil is the Latin American role model, and South Africa the example for the rest of its continent, Korea is certainly starting to be perceived as the successful case study in Eastern Asia of the last decade. Sure enough, Seoul has major challenges in the years ahead: among the most urgent are the improvement of income equality; an aggressive development of services, a troubled demographic transition, poor record in labour productivity and attraction of foreign direct investments. That said, South Korea is a country that weds a model of sustainable economic development with following its democratic obligations in a region where a ubiquitous political instability reigns, mostly caused by North Korea. Let’s talk more about the Korea that counts.