There are many machines,weapons and items that have marked the history of war throughout the ages. Roman legionaries had their gladius and their helmets, samurai had the katana and so on. In the second half of 20th century all the revolutionaries and the rebel movements were distinguished by the well-known AK 47 and, in the last decades thirty years, even by the technical vehicles. An open backed civilian pickup truck or four wheel drive vehicle mounting a machine gun, light anti-aircraft gun, anti-tank weapon, or other support weapon. It has played a big role especially in the conflicts that have been taken place in Africa and in the Middle East. The technicals have become the cavalry of any insurgent movement in that territories. They respond to the request of rapidity and fire power that all those groups need, without spending the money that only a government has. They need no specific training to be driven and no special logistic support. However, they do not have only strong points. Being civilian vehicles, they are not designed and adequate for combat purposes, so they do not carry any kind of protection or armored for their passengers and crew. 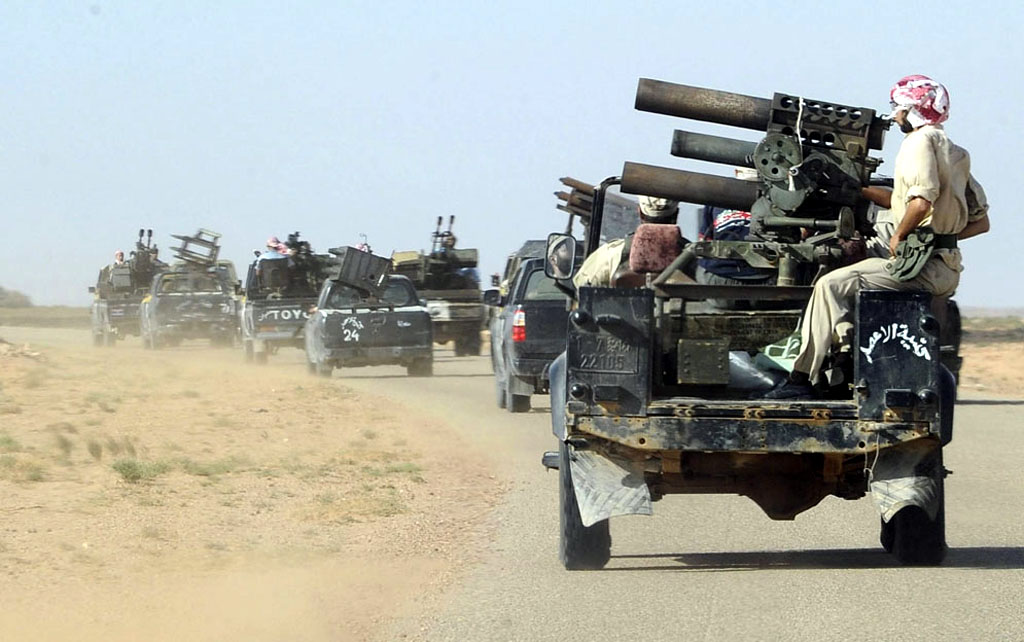 The term “technical” comes from the Somali civil conflict. In the early 1990s, NGOs that operated in the country were barred from bringing in private security, so they hired local gunmen to protect their personnel, using money as “technical assistance grants”. Eventually the term broadened to include any vehicle carrying armed men.

The technicals became so important that a power of a Somali warlord could be measured by how many vehicles he owned.

Even if the term was coined during the Somali civil war, the use of improvised fighting vehicle dates back to the invention of automobile, and eve earlier, to the horse drawn tachankas mounting machine guns in eastern Europe and Russia.

During World War II, in northern Africa, various units, like the British Special Air Service (SAS), recurred to unarmored motor vehicles, often fitted with machine guns and cannons, to carry out their actions in the desert.

The first rebel group that recurred to these vehicles was the Polisario front in its struggle against Moroccan and Mauritanian governments for the independence of western Sahara.

These fighters became masters in the use of technical, relying on their speed and rapidity to launch assaults against Moroccan and Mauritanian troops and disappearing in the desert immediately.

Technicalswere widely used even in the conflict between Libya and Chad, that became famous as “Great Toyota War”. During the clashes between the two armies, it was discovered that these light vehicles could ride through anti-tank mine fields without detonating the mines when driven at speeds over 100 km/h. The Toyota War was unusual in that the force equipped with improvised technicals prevailed over the force equipped with purpose-built fighting vehicles. Eventually Chadianvictory was also due to the fact that those vehicles mounted modern anti-tanks missiles MILAN, that gave a big advantage against poorly equipped Libyan troops.

Somali conflict marked the turning point for the use of technicals. Reporting from the frontline, all the TV channels that followed the war broadcasted the images of Somali rebels fighting against each others and against UNISOM troops on those vehicles. All the factions have used them. Mohammed Farrah Aidid, the most famous rebel leader, deployed 30 technicals along with a force of 600 militia to capture Baidoa in September 1995. After he was killed in clan fighting in 1996, his body was carried to his funeral on a Toyota pickup. The president of Puntaland, General Adde Musa, personally led personally  fifty battlewagons to Galkacyoto confront the Islamists on November 13, 2006.

American Special forces employed them in many clandestine operations in Afghanistan. Special Forces used Toyotas on the battlefield for several years, until the increased proliferation of Improvised Explosive Devices forced them into military-grade mine-protected vehicles. But Afghan troops still use Toyotas by the thousands.

Before the collapse of his regime, even Saddam Hussein forces used techinicals. Afterward,the Coalition also supplied technicals to the Iraqi police. Private military contractors drove also technicals and the United States military used modified Toyota Tacoma pickups (purchased from auto showrooms in the USA and modified before delivery) as well. These vehicles appeared also in the Darfur conflict.

During the Libyan civil war, both regime loyalist forces as well as the anti-Gaddafi forces used technicals extensively. Given the type of warfare that had been carried out in the conflict—wherein highly mobile groups of soldiers and rebels continued to move to and from on the desert terrain, retreating at a time and then suddenly attacking to regain control of small towns and villages in the Eastern rebel held parts of Libya—had led to the technical becoming a vehicle of choice for both sides. Technicals had also been widely used by the rebels whilst setting up checkpoints. It also formed a vast percentage of the rebel inventory which was limited to light weapons, light body armor and very few tanks.

In the ongoing Syrian civil war, technical have been seen on sides of loyalist forces and rebels and Islamist factions. The kind of weapons mounted on technicals varies widely, from light machine guns to anti-aircraft guns and even BMP-1 turrets.

ISIS captured many  Iraqi police and army techinicals during its offensive in the north of Iraq. Even Peshmerga fighters have tested the versatility of these vehicles, relying on their agility to surround and attack ISIS forces.

Technicals seem to have become a landmark for the fighters of asymmetric conflicts. Their agility has allowed poorly equipped forces to be more effective, even against better  equipped enemies.The fact they are cheap, easy to use and perfect for the harsh terrains in the Third World countries, make them the best option for every fighter group that can not afford expensive and sophisticated armored vehicles.