Sei in: Prima pagina > Medio Oriente e Nord Africa > The complexity of the situation in Lebanon: an interview with Dr. Haytham Mouzahem

Crisis, instabilities and conflicts in the ethnically and religiously fragmented Lebanese society, largely represent a consequence of the transnational loyalties of Lebanese people. For example, Shias to Iran, Sunnis to Saudi Arabia and Christians split between the West and Russia. The rift between the Lebanese religious groups, especially among Shias and Sunnis that erupted in the1975-1990civil war,has again been ignited, due to the Syrian situation. In order to provide a better understanding of current situation in Lebanon, Geopolitica.info have discussed about it with Dr. Haytham Mouzahem, Executive Director of Beirut Center for Middle East Studies. Mouzahem, PhD in Philosophy and Islamic Studies, is a Lebanese scholar, analyst and researcher specializing in Middle Eastern and Islamic affairs. Mouzahem has published two books: The Israeli Labor Party, 1968-1999 (Arabic, 2001) and The Conflict Over the Middle East (2013), and contributed to 8 others. Two more of his own, The Evolution of the Shi’ite Marja’eya and How the revolutions occur, will be published soon. 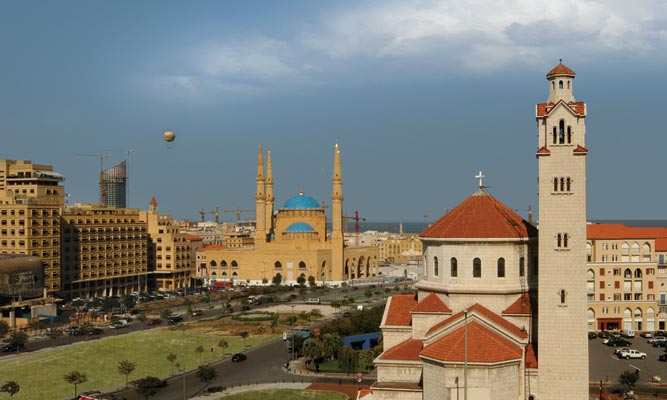 After about a year of the miliatry conflictin Syria, the Shiite militant group, Hezbollah, is fighting on the side of the Assad government against Sunni insurgents and Al Qaeda, convinced that if Sunni take power in Syria, Lebanon’s security will be directly endangered. In addition, the Syrian conflict continued to spill over into Lebanon, as evidenced by the last twin suicide attacks in Tripoli, where pro-Qaeda, AlNusra Front, killed nine and injured thirty-seven. Accordingly, could the conflict in Syria, which turned into a sectarian war, escalate into a global conflict between Sunnis and Shias?

Unfortunately, the Syrian war and the Iraqi conflict have become sectarian conflicts between Sunnis and Shias, due to the discourse of hatred of ISIS and Al Qaeda and its Syrian branch, Jabhat Al-Nusra, against Shia, and their daily massacres through suicide and car bombs against Shia civilians in Iraq since 2003. These continued blasts have raided the sectarian sentiments and discourse in the region, backed by some regional states that support the Salafi Wahhabi school that considers Shia as unbelievers (Kuffars) and justifies their killing and robbing and slaving.

Following the crisis in Syria, the conflict has turned in somehow into a sectarian one due to the fact that the Syrian president belongs to the Allawite sect, and the using of  the sectarian discourse against the regime by the Syrian Salafist Jihadis as Jabhat Al-Nusra and the Islamic Front as well as ISIS, and other Islamic groups.

However, these conflicts in Syria, Iraq, Lebanon, Bahrain, and Saudi Arabia between Sunnis and Shias, won’t lead to a comprehensive Sunni-Shiite war, because a large parts of Sunnis in Syria, Iraq, Lebanon, still support the governments and the national unity with other sects in their countries, including Shias and Christians. I believe those conflicts are political and social ones despite the sectarian divisions, and the regional neighbors as well as international powers, play a big role in promoting the sectarian discourse to serve their political aims.

Apart fromthe heated situation inSyria,the(in)stabilityof Lebanon is significantlyaffected by the long-standing Israeli–Palestinian conflict. Moreover, from the beginning of theconflictin Syria, Hezbollah has been struck several times by Israel in both Syria and Lebanon. Moreover, six members of Hezbollah, including the son of a slain military leader Imad Mughniyeh, were killed in an Israeli air attack in the Syrian province of Quneitra. In a retaliatory attack on an Israeli convoy on January 28th, Hezbollah killed two Israeli soldiers.Does Hezbollah have enough capacity and will for a major escalation with Israel (i.e. open up another front), with their hands full inside Syria?

I don’t think the tension between Hezbollah and Israel will escalate into a comprehensive war because both sides don’t have interest in this war. Israel has tried with its assassination of Hezbollah cadres in Qunaitra to change the game’s rule of deterrance that has been set after the Israeli war on Lebanon in July – August 2006. But Hezbollah’s retaliation in his attack againt the Israeli army vehicles in Shebaa Farms has sent a message to Israel that it won’t accept to change the game’s rule and that the group is ready to revenge and even if that would escalate to a war.

The secretary General of Hezbollah Hassan Nasrallah said that his party is ready to fight Israel if it will attack Lebanon or the group positions in Lebanon or Syria. He stated that despite the group’s meddling in Syria, the ‘resistance forces’ are not involved in Syria and they are ready and fulltime engaged in monitoring the front with Israel.

Lebanon’s president has been vacant since the 25th of May2014. The parliament elected in 2009 for a term offour years twice decided to extend the mandate without holding elections, the first in May 2013 for 17 months, and then in November 2014 for another 31 months. After nearly 10 years of Syrian withdrawal from Lebanese territory and the beginning of the so-called “second independence era,” the suspension of parliamentary and presidential elections shows that Lebanon is not capable to practice democracy and maintainstability. Can we state that in this way the Lebanese political elite voluntarily placed the country under foreign tutelage?

The failure of the Lebanese parliament in electing the president on time is due to political divisions as well as to foreign interventions. The foreign intervention in Lebanon has not stopped since the independence in 1943 and the sectarian and political divisons have allowed to international and regional states to intervene in Lebanon domestics and its civil war(1975-1990). The election of Lebanese president has been historically dependent of international – regional compromises, particularly between Syria and the US in the last four decades. Following the Syrian crisis and the rising of Iran and Hezbollah’s influence in Lebanon the election of president needs a compromise between Iran and the US, as well as the Saudi Arabia which has a great influence on the Sunnis in Lebanon, especially the Future party, and March 14 coalition.

Regarding the parliamentary elections, they have been canceled and the MPs extended their mandate for four years in  a law, due to security reasons after the clashes in Tripoli and Arsal between the Lebanese army and some extremist militants.

The conflictin Syriahit the Lebaneseeconomy hard, as, inter alia, touristsand foreigninvestors do notwantto be presentin an insecure country.According to the statementof the ministerof social affairsof Lebanon,RashidDerbas, nearlyfour years of civil warinSyria havecostLebanon more than 16 billioneuros.More than one million Syrian refugeeshave officially registered in Lebanonwhich has caused asignificantdepletion of naturalresources. Consequently, the Lebanese government introduced stricter entry procedures for Syrians, who have to provide documentation identifying their reason for being in Lebanon. How would you comment on this? Which results do you expect from this decision of the Lebanese government?

Yes, the Syrian war has affected Lebanon in many fields, especially on the security and socio-economic levels, as well as the demographic level. Due to the Syrian war and the Lebanese divisions regarding this war, there is no political and security stability in the country and that leads to the withdrawal of some investors and don’t encourage any new investor to invest in Lebanon.

There are more than 1.5 million Syrian refugees and the UN and international agencies don’t take care enough of those refugees, while Lebanon resources can’t afford to ensure allocations, electricity, water, food, health and education services for this large number of refugees. Also, there is a security threat of this number of refugees, that the majority of them are pro-opposition and from the Sunni sect, which could cause some tensions with other sects and some security challenges.

The fact that is the refugees now constitue about 30% of the population is a demographic challenge to the Lebanese state that has been set on balanced sectarian bases. The Christians already claim that has become a minority of 30% of the population, without counting the Palestinian and the Syrian refugees. There are some concerns among Lebanese Christians and Shias that the long de-facto presence of the Syrian refugees, mostly Sunnis, would change the demographic and religious pluralism in Lebanon, and make the country looks as a Sunni country with some minorities.

These issues have forced the Lebanese government to put some stricter entry procedures for Syrians, so now they should  provide documentations identifying their reason for entrying in Lebanon, althought that this decision came very late, after 4 years of the Syrian crisis.