Being at the same time an internal and an external matter to Turkey, the Kurdish issue has always been one of a particular importance in Turkish complex political life. 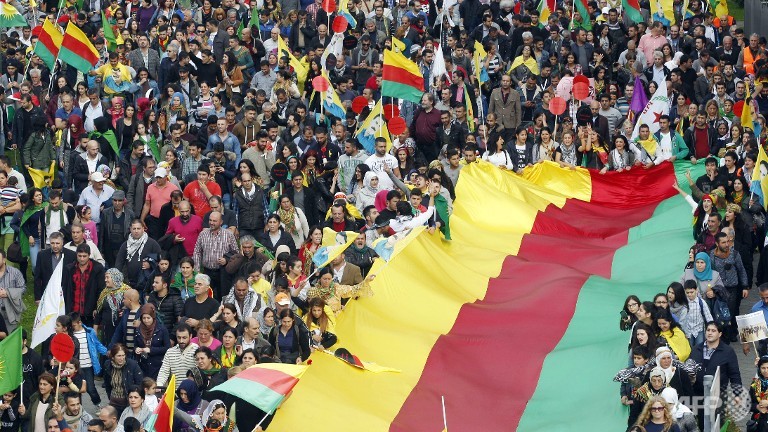 Being huge the presence of the Kurdish minority in almost all the Countries surrounding Turkey, and having been the concept of cultural uniqueness and territorial unity a key one of Kemalism and that of the ideologies of many of that States of that area, the presence of Kurds had often achieved the peculiar goal of at least partially harmonize the otherwise irreconcilable foreign policies of the Ba’th-Party-ruled Syria and Iraq, the revolutionary Iran and, of course, Turkey.

That policy has been of course that of the assimilation of Kurdish culture into the different regional entities.

Kurds saw an effective possibility of self determination only in 1920, when the Treaty of Sévres envisaged the establishment of a new state called Kurdistan. That treaty was eventually not fulfilled and the Kurdish issues crystallized in those different States that would arise from the ashes of the Ottoman Empire as an uncomfortable problem.

The reforms which followed the first Gulf War offered the Iraqi Kurds an autonomous Region in the north of the Country in 1992. This Region has later been experiencing a regime of semi-autonomy after the second Gulf War and the eventual end of the Ba’th regime. Its presence had therefore heavily influenced the Turkish policy towards the Kurds from 2005.

Turkey effectively found itself in such a position that it could not ignore the presence of a Kurdish internationally recognised entity at its border, not being able anymore to see in Baghdad’s central government an ally to deal with that issue. At the same time, neither it could ignore that this entity would become an extremely important partner in both commerce and energy issues.

The trade interchange between Turkey and the Kurdistan Regional Government reached the amount of more than 12 billion US$ in 2014. Even more important is the energy issue, given the absolute need for Turkey to find cheaper energy suppliers in order to sustain the industrial development of the Country. Nowadays the price of oil in the Country is extremely high if compared to the average per capita income, and the Government is unable to cut the tax wedge on energy.

The President of the Region, Mustafa Barzani, has been the Kurdish representative for the Iraqi side towards the Turkish government. Several bi-lateral meetings have been held in order to establish firm relationship between the two entities and Iraqi Kurdish oil is being sent directly to Turkey not passing through the central Iraqi Government.

The evolution of the relationship between Turkey and Iraqi Kurdistan was also helped by the opening of the Turkish state to the recognition of Kurdish minority, its cultural diversity and its proper language and the determination of granting education in Kurdish language (although in private schools).

The resolution of the Kurdish issue has been one of the main target of the ruling AK Party, whose combined policies of national pride and economic liberalism shuffled the cards of the Turkish secular and nationalist élite policies, opening the Country to a completely new social outlook: the one of a multi-cultural Turkey, where the presence of non-Turkish (or non-Turkic) minorities wouldn’t be itself a problem to the integrity of the State.

Such a safer context let the opening of secret talks, held through the Turkish Security Services, between the Turkish Government and Abdullah Ocalan, the imprisoned undisputed leader of the PKK and the PYD, the clandestine parties representing the armed wings of Kurdish insurrection in Turkey and Syria.

This foreword should not lead the reader to believe the Kurdish issue has come to an end, or at least to a path that would presumably lead to that: as it is easily understandable, the Kurdish issue in its whole may not be fully understood if not under a light able to enlighten Ankara, Damascus, Baghdad (and Erbil) at the same time.

The AKP political and social philosophy is not hostile in theory to a recognition of the Kurds (also given the universalism of Islam), but it would be extremely naïve to Ankara to believe that the liaisons between Turkish and Syrian Kurds end at the border of the two states…Ankara is equally aware that letting the existence of an autonomous Kurdistan in Syria, even if as a result of the fall of the hated Assad regime in Damascus, would seriously jeopardize Turkish territorial integrity, as all the Kurdish parts are definitely fighting in order to get a fully independent State. In august 2013, at a pan-kurdish congress held in Erbil, KRG President Barzani stated he wouldn’t save any effort in order to help his Syrian brothers. He was referring to a military intervention.

Here we come to the main point: Syria and Iraq are in a huge turmoil and see a plurality of actors on the ground. In Syria, the so-called moderate anti-Assad insurrection, the formal Army and some eastern “consultant”, and the Islamic State. In Iraq we see the formal Army, the élite “Al-Qods” Pasdaran Brigade amongst many foreigner “consultants” and the Islamic State.

Kurdish military forces exist in both territories, clandestinely by one side and formally under state-recognized militias (Peshmerga) by the other.

Kurds are now to the Turks a necessary ally on the Iraqi bound, a danger on the Syrian one and a source of social unrest at home. But the Kurds see themselves as a unique force, fighting for the same purpose, be it a confessable one (for the Syrian ones) or not (for the Iraqies).

The Ankara inactivity in the Kobani issue after the deployment of its Army at its southern borders, although the city is only 1 kilometre far away from the border and despite all the pressure of the International Community to Turkey to intervene in the matter and save the city from being slaughtered, provoked serious social unrest in some South-Eastern Kurdish Turkish cities. Casualties were registered among local Police officers.

This may lead to a serious evolution, in the worst sense, of the Turkish-Kurdish peace process. Although Turkish Government is not completely hostile to Kurdish recognition, by Turkish side it may not happen under the present conditions.

Turkey was amongst the most active States promoting a military intervention in Syria to overrule Assad’s regime in 2013.This would have permitted the deployment of an international force, letting Turkey enjoy the support of many other Countries without having to bear alone the logistic and financial weight of the intervention, and permitting it to physically put its Army’s boots on the ground. What is exactly what is waiting to do now.

Turkey’s President has no more than 48 hours ago defined Kobani issue as a “foreign” one, something no way related to Turkey. He also asked what Kobani had to do with Turkey, with cities like Ankara or Diyarbakir or Bingol. It was quite a provocative question, given Diyarbakir and Bingol are exactly the cities where the most severe turmoil happened.

The true strategy of Turkey now is just waiting for the situation to become simply unbearable to Western audit and maybe hope it happens after the complete fall of Kobani, given that the city has always been the centre of Syrian Kurdish irredentism and its fall would mean the elimination of much of Syrian Kurdish military staff.

The contingently reaction of the Kurdish Turkish minority and some episode of violence would pave the way to police operations in the whole South East.

We may be sure the Turkish intervention in Syria, after all this patience, will take place. We may also be sure it will be an important and lasting one.

The presuppositions for it to happen are:

At that point, Turkey will be able to heavily put its boot on the ground, assure to itself the management of the buffer zone and being able to discard the Islamic State and face Kurdish forces directly, sure of the endorsement of the largest part of its electorate, which will see for the first time the AKP conservatives agree with the laics, heavily concerned about Turkey’s territorial integrity.