Sei in: Prima pagina > Notizie > The role of oil and gas in Azerbaijan’s foreign policy

The history of Azerbaijan and its capital Baku is indissolubly connected with oil and gas from the earliest days. The existence of important oil fields dates back to ancient times. The richness in  natural resources of the territory of Azerbaijan historically represents the most important factor that had contributed to the history of the country. The first reliable informations about oil extraction on the Absheron Peninsula, where Baku is located, date back to the 7th and 8th century. 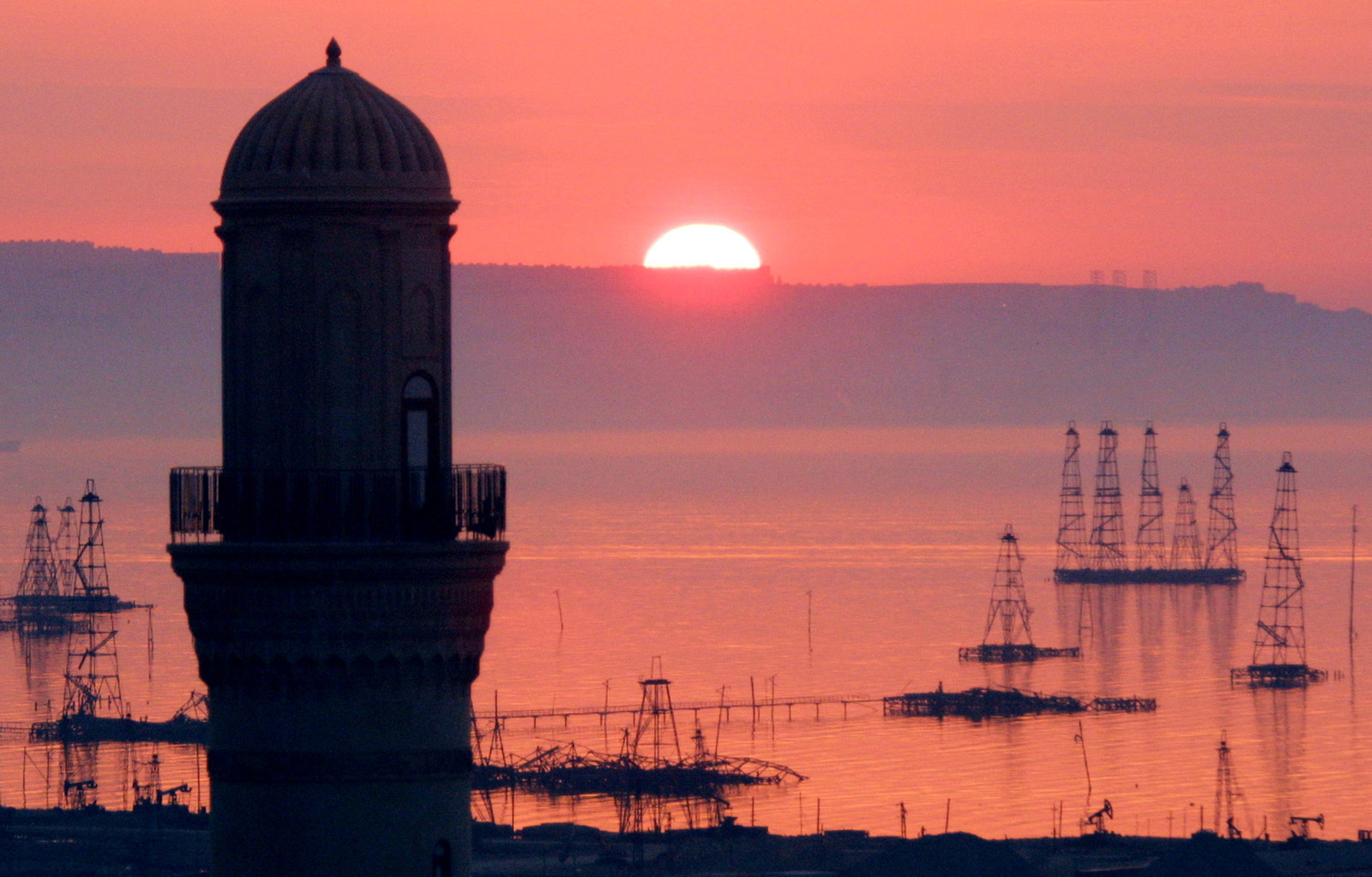 During the years the demand in oil grew unceasingly turning the oil industry into a capital production sector. In particular, by the end of the 19th century, the upsurge in the oil industry attracted considerable investments and encouraged new factories and plants construction. By the turn of the 20th century, Baku became a center of world oil commerce and was producing the 50% of the world’s oil production.

The economic potential of Baku was recognized even by the Soviet Union which established its domain over the region. The Soviet period last until 1991 and during that period, the oil industry of Azerbaijan saw many ups and downs. Following its independence from the Soviet Union in 1991, the country significantly developed its oil and gas sector as the main driver of the economy. The energy policy of Baku can be divided into three phases : 1) “the Golden Age”, from 1871 to 1920, was the period between the year in which the first drill was installed in Baku and the year in which the Red Army established its domain over the region putting an end to the short but innovative country republican experience; ii) the so called “Soviet Middle Age”, was the period between 1921 and 1991 during which Moscow planned the mining policy of the Caspian region; iii) the “Azerbaijani Renaissance” which started in 1992 and which is still ongoing. After the dissolution of the Soviet Union, Azerbaijan started to acquire autonomy as well as the capability to manage its hydrocarbons stocks in an autonomous way.

The most important entail of the Soviet domain in Azerbaijan was a remarkable infrastructures network for the extractions of hydrocarbons. After the collapse of the Soviet Union the history of Azerbaijan can be conceived as an attempt to diversify its energy exports routes.

During the Soviet period the role of Azerbaijan and other Caspian countries was confined to that of sources hence the central power would extract the needful resources, mostly oil, to satisfy internal and foreign policy requests. For the entire duration of the Soviet domain the Caucasus countries have experienced a subordination condition and the exploitation of their resources. With the loss of the Soviet control Baku started to decide the terms of the extraction processes, the methods and the partners, the destination markets and the transit countries.

The exploitation of hydrocarbons in Azerbaijan, as well as similar projects in neighboring countries has led to the development of a regional pipeline’ system. After the dissolution of the Soviet Union the government of Azerbaijan started to think about the creation of an alternative to the main Russian transport corridor infrastructures. In creating its own infrastructure policy the government has somewhat integrated into the world economy, especially in the area of energy exports. Towards the end of the 90s two major pipelines were restored: Azerbaijan-Georgia (Baku-Supsa) and Azerbaijan-Russia (Baku-Novorossiysk); most of the Azerbaijani oil now passes on these routes.The Baku-Tbilisi-Ceyhan (BTC) is a pipeline crossing the territories of Azerbaijan, Georgia and Turkey and which transports oil from the Caspian to Western markets via the cities of Tbilisi and Ceyhan. The Baku-Tbilisi-Ceyhan (Azerbaijan-Georgia-Turkey), is the main pipeline in the region and its cost amounts to over $ 4 billion. It is one of the largest energy projects and one of the most important oil pipelines in the region.This project within the South Caucasus Pipeline (SCP) practically put an end to the Russian monopoly on the transport of energy resources from the Caspian Sea. From the BTC, infrastructural developments became a key element of the consolidation of the independence of Azerbaijan.From the beginning particularly important appeared the envisioned pipeline projects to bring the Shah Deniz gas to European markets: the Nabucco, the Interconnector Turkey–Greece–Italy (ITGI) and the Trans Adriatic Pipeline (TAP), which was chosen among all the projects in June 2013.The Nabucco project was among the ten European interest projects which should have the highest priority. It was pursuing a clear target to erode the market share of the European markets on Russian exports.

Even if the project of Nabucco has represented the backbone of the regional strategy of the European Commission that project failed because of the attitude of the countries involved in it, which maintained a channel of dialogue with the Russian Federation aimed at the construction of the pipeline, the South Stream, in open competition with it. During the Greek crisis in 2012 also ITGI project was excluded from the race.From the moment in which it was conceived TAP represented a further diversification attempt of European energy supply sources and routes. The Trans Adriatic Pipeline is the European leg of the Southern Gas Corridor, which aims to connect the EU market to new gas sources. With an initial capacity of 10 billion cubic metres of gas per year, the pipeline will transport gas from the Shah Deniz field in Azerbaijan to the EU market as of 2020. The Trans Adriatic Pipeline will run from the Greek border via Albania to Italy, under the Adriatic Sea. TAP will invest €5.6 billion over five years in the project, of which €2.3 billion in Greece.  Compared to Nabucco, beside the higher profitability, the main strength of the interconnection project between Turkey and Italy, is the support granted by the government of the countries involved in the transit. The guarantee of political support has been designed to reduce the risks for infrastructure investment. Especially Italy demonstrated an important attempt to support the project. The most significant moment was that of the Intergovernmental Agreement between Italy, Albania and Greece in February 2013. Even if the impact of Caspian infrastructures was marginal compared to the volume of European consumptions, through its diversification policy, Azerbaijan is able to multiply its potential clients and to offer an alternative to Russian supplies.

The key strength of Azerbaijan is that it has abundant energy resources, especially oil and gas. It is among the 20 largest oil producers in the world and one of the largest when measuring oil production per capita. Azerbaijan currently produces 848,000 barrels per day (bpd), and has 7 billion barrels of oil reserves that should last for more than a decade. About 20% of production comes from a consortium of 10 companies (AIOC) led by BP. Domestic oil consumption is around 101,000 bpd, which means that most of the oil is exported, mainly through its Baku-Tbilisi-Ceyhan (BTC) pipeline. Azerbaijan has recently started to export gas. It currently has 1.2 trillion cubic meter (T cm) of reserves and produces 16.9 billion cubic meter (Bcm). Consumer use is 9.2 Bcm and exports primarily to Turkey and Russia absorb the rest. Output is expected to more than double with the Shaf Deniz Full Field. A new pipeline, at a projected cost over $11 billion, is under construction and expected to be finished by late 2018, in order to export gas to Georgia, Turkey and eventually Europe.

Oil and gas are the main drivers of the economy amounting to 87% of total exports, 45% of GDP and 70% of revenues. Like other commodity dependent countries, changes in oil and production and prices largely determine the direction of the economic growth. However, the government has done a good job of reducing economic volatility related to the oil sector through the creation of the sovereign wealth fund. It uses high amount of the oil funds when oil prices are low and accumulates savings when they are high.

Azerbaijan strongly promotes the creation of interdependent relations with transit countries, especially neighbouring countries like Georgia and Turkey as these are the main states through which its resources are transported. This trend will only increase and encourage the future establishment of additional political and economic ties with the countries and major international actors that have particular interest in the transportation of Azerbaijan energy resources to world markets. The reserves of oil and gas in the country represent an effective instrument to resolve the Nagorno Karabakh conflict. The successful exploitation and the export of Azerbaijan’s oil and gas via a pipeline network beyond Moscow’s control has provided the cash needed to modernize, train and re-arm Azerbaijan’s armed forces with the possible long-term objective of launching a military offensive to win back control over Nagorno-Karabakh.

The government is working to maintain its economic relevance and to investigate new options to export its production out of Azerbaijan looking at the Black and Mediterrean Seas.

Azerbaijan has abundant energy resources, strong economic fundamentals, political and social stability, and market friendly policies. The country has managed its natural resources well and this is reflected in the fiscal and current account surpluses and an accumulation of savings. The sovereign wealth fund has reduced economic vulnerability to the fluctuation of commodity prices and has helped reduce economic imbalances. The country faces weaknesses such as a volatile relationship with Armenia. The country’s energy and oil production looks stagnant in the short-term, making the performance of the non-oil sector vitally important. The government is moving in the right direction to cultivate the non-oil sector, and today is claimable that Azerbaijan succeeded in promoting economic diversification and modernization to improve its competitiveness, to ensure the country’s sustainable economic growth and to improve the welfare of its citizens. During the past the 95% of the country’s GDP came from oil; today the economy of Azerbaijan is already diversified, with the non-oil sector accounting for about 70% of the gross domestic product. Azerbaijan developed new sectors of economy in order to become less dependent on unpredictable hydrocarbon prices.

The economy of Azerbaijan came through the recent global financial crisis with minimal loss. In terms of longer-term economic growth it is essential to develop a more diversified economy. The predicted decrease in oil production after 2016 forces the government to accelerate this process. Moreover, sustainable development in the country and the prosperity of future generations means that other sectors of the economy must be improved, this with an eye to minimize the dependency on finite natural resources.